Relocating from South Africa to the US was just a huge thing for me, extremely difficult. Maybe because I am now 64 ... I believe it would have been easier if I had my NAD + Phyto My NAD stock ran out at the end of May and by July '20 I almost wanted to fall apart! There is nothing but nothing like NAD + Phyto for stress and Fibromyalgia ... and I can not wait to use the new NAD Elixer!

NAD + phyto is the most amazing thing that could have happened to my health and well being!! 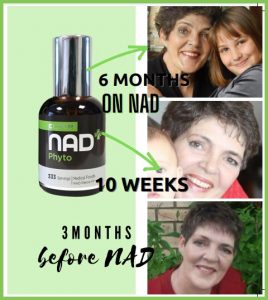 I had a stroke in 1996, shortly before my fortieth birthday, which changed the direction of my life quite a bit!

For the past 23 years I have been trying almost everything to just get my health back to standard ... Vitamins, Nano Silver Colloids, Ozone-Sauna treatments, Bodycleanse detoxes and and and! All these efforts made a minor difference, but my health still deteriorated due to a series of setbacks in my life, as below:

This was the end, I had almost no energy, a compromised immune system, I wanted to give up on life. I could not carry on, no matter how much I wanted to go on for the sake of my children and grandchildren! Period.

Then I read on a friend’s, of almost 30 years, Facebook about her excitement about NAD. I contacted her and out of sheer desperation decided to give it a try! It was October 2018. Because I was so ill I did not expect to experience results very soon!

About 10 days after I started using NAD +, one night, when I got up to go to the bathroom, I realized that I was no longer off balance! Even my bladder emptied better ... the first two miracles!

One morning when I woke up, I heard the birds singing outside and I just wanted to be barefoot in my garden again. I wanted to live and enjoy life ... miracle number three!

I had ENERGY, something I had not had in abundance for several years; something I coveted with all my heart. It spurred me to a new desire for life! I have always been a very active person, the rediscovery of energy changed me, I wanted to live. I had to learn to manage my newfound energy wisely.

Something that worried me a lot many months before I started NAD + was that the left side of my mouth sometimes felt "dead" and I had no control over the saliva that often dripped from that corner on my mouth ... completely like after my stroke in 1996. NAD + Phyto got my mouth right again and I'm not as clumsy as I have been for the past few years!

I started sleeping better, I was no longer that pathetic, depressed person struggling through the days and nights … a miracle!

My hair started to grow lush again, and for the first time in my life, my nails are so strong that I have to file them regularly ... miracle! I rarely used to cut my toenails and they started to grow so much that I now have to clipt them every three weeks!

I broke my left ring finger in 2016, it stayed stiff and sore and I could not straighten it, unless by forcing it open in two bursts ... I was referred to a doctor who would have treated it with injections.  However,  I was simply too tired, and afraid to try it! After only four months on NAD + Phyto, my finger had fully recovered ... miracle!

Fibromyalgia caused me to not be able to sleep at night without presoaking  in a hot bath for at least half an hour! Likewise, I could not get going in the morning without first "thawing" in a hot bath! Now my body is satisfied with a cooler shower, I am much more mobile than before, and no longer feel so terribly old ... miracle!

Likewise, my concentration is much better, especially when I drive my car in busy traffic. I feel and stay awake over long distances ... miracle!

My liver has improved so much that I can now use milk and cream without getting nauseous ... I used Milk Thistle for years because I could not eat anything rich or creamy  since childhood ... miracle!

Although I am still struggling with my back injury, the Lord is very good to me.

My family and many of my friends are now also using NAD+!

My sister, who had a big lump on her thyroid for many years, let me know after just six months on NAD + that the lump was completely gone ... and she looks beautiful!

At the end of December 2018 I had a NAD drip which helped a lot to fill my big NAD backlog ... I would definitely recommend it!

Except for NAD + Phyto and an Omega3 supplement; I no longer use many expensive supplements, which did not really work! Thank you Dr. Theo Verwey for your outstanding NAD + Phyto formula!

I moved to America permanently at the end of 2019 and soon started distributing my NAD + Phyto stock among sick people, with great feedback, especially one man (48) who had a stroke, his speech and movement miraculously improved!

Then Covid hit; my NAD + Phyto capsules stock ran out, due to the travel restrictions I could not fly to SA to replenish my stock.

In desperation I started looking for a replacement for NAD + Phyto in America, trying four different types, but nothing came close to NAD + Phyto by Theo Verwey in SA!

My friends and family in SA are ecstatic about the new NAD Elixer, especially the older lot and little ones, because they no longer have to swallow capsules ... brilliant improvement with increased absorption!